Wheel of Time 05: The Fires of Heaven by Robert Jordan

One of the criticisms often laid at the feet of this series – and not unfairly – is that it is splintered.

Read any epic fantasy, and you’ll see that at some point, the author splits the party up. This is an almost guaranteed way to create more action, more storylines and, if you’re being paid per word, more money for the author. Tolkien, the grandfather of modern fantasy, did a nice job of splitting the Fellowship up into three branches at one time, and then brought them back together at the end. Since then, the technique has been a stock tool of any writer who is dealing with an ensemble cast in her work.

This pretty accurately describes the plot structure from here on out…

Jordan has taken this technique to its extreme. He used the standard method back in The Eye of the World – split the group into three, bring them all back together just in time for the climactic ending. Pretty boilerplate plot construction right there. From The Great Hunt, however, we began to see that having all of our main characters in one place at one time will be more the exception than the rule – while it starts and ends with everyone together, the beginning of The Dragon Rebornstarts us off with the party split again, bringing them all together only at the very last minute.

By my count, there are eighteen different point-of-view characters in this book, occupying four different major plot threads, only two of which actually manage to come together by the end. And it just gets more complicated from here on out. From my research, there is yet to be any point in the series where every plot thread manages to come together in one place at one time.

For some readers, this is supremely annoying, and I can’t say I blame them. You find yourself going back and forth from character to character, keeping up with storylines that are superficially unrelated, all in the hopes that they’ll pay off eventually. The circus interlude in this book is an excellent example. In an attempt to hide from the Forsaken Moghedein (whom Nynaeve seriously pissed off in the last book) and to get safe passage to the rebel Aes Sedai after the breaking of the White Tower, Elayne, Nynaeve, Thom and Juilin find themselves traveling with a circus. The logic behind this is that no one would ever look for them there, and I suppose they’d be right. I certainly didn’t see it coming. 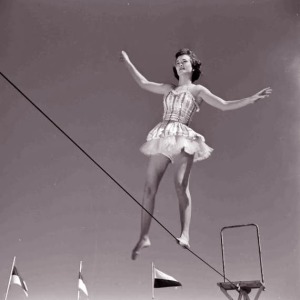 I’m not sure why this never caught on as a dominant fantasy trope.

There’s a lot of good old-fashioned circus wackiness that goes on – Elayne puts on tights (which just scandalizeNynaeve) and learns to walk a tightrope. Nynaeve ends up being the target for Thom’s knife throwing and battles her own distaste at the skimpy clothes she has to wear versus the fact that she thinks they look pretty. Now I’m not saying that nothing important happens during the circus interlude – lots of things do. It’s just that there’s no reason they had to take place in a circus.

And there’s no reason they couldn’t, either. After all, who’s the multiple-bestselling author, Jordan or me?

As opposed to a single POV series, such as Harry Potter, where you know where the important action is and who it’s happening to, Wheel of Time requires its readers to observe a world of characters. And I think that’s the key to how these books are structured. The events that are happening here aren’t just happening to one small group of people, or one kingdom. It’s happening to the entire world, from the edge of the Aiel Waste all the way to the shores of the Aryth Ocean, from Seanchan to Shara. Rand al’Thor may be the Dragon Reborn (or the Car’a’carn or the Cooramoor, depending on whom you talk to), but that doesn’t mean he’s the only one who has things to do. In order for the Last Battle to be won, a whole lot of things have to happen, and not all of them are going to be centered around our main protagonist. 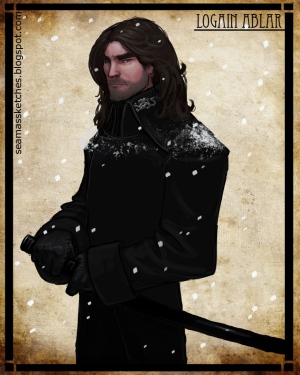 I’d hang out with this guy, no question… (art by Seamus Gallagher)

In this book, for example, we have two groups looking for the Aes Sedai who fled the White Tower when Elaida became Amyrlin (I hope you’ve been keeping up, otherwise that last sentence makes no sense whatsoever). Siuan Sanche and Leane Sharif, the former Amyrlin and her Keeper, are traveling with Min (a young girl who can tell the future from people’s auras) and Logain (a former False Dragon whose ability to channel was severed by the Aes Sedai.) And then there is Elayne and Nynaeve, who were both out of the Tower when the rebellion took place, but who hate Elaida more than Siuan, so they’re trying to find the rebels. These two plot threads eventually merge, but it takes fifty chapters before that happens.

At the same time, there’s Rand, Mat and Egwene, who are leaving the Aiel Waste for Cairhein, hot on the trail of the Shaido Aiel, who are murdering and pillaging everything they can find. The Shaido are a “rebel” clan, who refuse to accept Rand as the Car’a’carn (the Aiel’s Chief of Chiefs) and have decided that the best thing for them to do is to kill everyone who isn’t an Aiel. Rand and friends chase the Shaido all the way to Cairhein, where they engage in a fierce battle to save the city from being ravaged by war for the third time in twenty years. Even within this plot thread, Mat, Rand and Egwene occupy their own strands, staying apart more often than they get together.

The fourth plot thread is a thin one – Queen Morgase of Andor, who has been gulled into complacency by the Forsaken Rahvin (who is posing as “Lord Gaebril,” the queen’s lover) has finally come to her senses, and escapes from her own castle. She doesn’t know where she’s going, or who will help her, but she’s intent on regaining her throne and seeing Gaebril hang. Lucky for her, Rand manages to take care of her little Forsaken problem by the end, although she’s unaware of this.

Meanwhile, the whole world is falling apart. The White Tower has well and truly split, something that the new Amyrlin, Elaida, is desperately trying to keep from the world. There is war and strife across half the continent, men who believe that the existence of the Dragon Reborn means that all bonds are broken, all social contracts annulled. The Prophet Masema – a man from the northern nation of Shienar – is preaching absolute devotion to Rand al’Thor as not only the Dragon Reborn, but as the source of all that is good. The coming of the Dragon brings not only a great battle with the Shadow, but great upheavals in civilization itself.

So, to say “there’s a lot going on in these books” is a bit of an understatement, and it’s Jordan’s fondness for creating new plot threads and then following them to see where they lead that has probably led to this series going on as long as it has. Had he just centered on Rand, it all could have been over in half the time. But it would have been far less interesting in the long run.

The characters of this world are fond of using a certain metaphor to describe life – the Great Tapestry. “The Wheel weaves as the Wheel wills,” they like to say, and they believe that each person’s life is a figurative thread in a greater system. Some characters, like Rand, Mat and Perrin, are more important than others, and they tend to bend other threads to follow theirs. But you cannot make a tapestry out of only three threads, and the end of the world in this series is something in which everyone may participate. Without the actions of the myriad minor characters, Rand wouldn’t be able to be the person he needs to be, and the story wouldn’t be able to be as rich and as complex as it needs to be.

So, give this some thought. If you’re the type of reader who prefers to stick with one character or group of characters throughout a series; if you don’t like having to keep notes on who is doing what and where; if you’re not the kind of person who would create a spreadsheet to note all of the different major characters, with color-coding and hand-drawn graphs…. Not that I have, mind you…. If that’s not your kind of read, then you may not enjoy this series. And there’s nothing wrong with that. But it’s good to know what you’re getting into.