A king is killed, usurped by a weak man and his overbearing wife.

A ghost haunts the castle, waiting for his son to come and avenge him.

On the highlands, three Witches hold their meeting, plotting the future of the kingdom.

I think Granny would not appreciate this image....

Sound familiar? It should. These are some of the most enduring tropes of English literature, and they’re all thanks to a singular playwright. Wyrd Sisters is Terry Pratchett’s tribute to some of the blood and gore and guts, tragedies and twists of Shakespeare’s great plays.

In fact, this book encapsulates my three favorite Shakespearean works – Hamlet, Macbeth, and King Lear. Yes, they’re all tragedies, but that shouldn’t surprise any of you by now. They plumb the depths of humanity to try to find glimmers of hope and bravery and redemption, and everyone usually ends up dead, but dead with a true sense of purpose. In this book we have, respectively, a king murdered by his own family, a woman who pulls the strings of the usurper, and a bloody great storm.

Anyone have some Purell?

Verence, the king of Lancre, has been assassinated. An accident, everyone says. He tripped and fell down the stairs, landing on his own dagger. Funny, that. But the new ruler of Lancre, Felmet, is not so steady in his convictions. He sees the blood on his hands, although he didn’t do it. He’s absolutely sure he didn’t do the deed. Anyone who says he did do it is likely to be shorter by a foot or so by morning. And his wife wasn’t there either. She didn’t hand him the knife. The point is that Verence is dead, long live the King, and now everyone can enjoy the easy life of a royal couple.

However, as so often happens in these things, complications arose. The dead king isn’t allowed to go away. He is confined to unlife as a ghost, unable to contact or interact with the world of the living – except in very small, nearly unnoticeable ways. As his murderers rule over his kingdom, Verence exercises his ectoplasm and plots a way to bring Felmet down. The king’s infant son was stolen after the assassination, you see – brought by a dying man to the home of one of Lancres witches, where he passed the infant to the three women there, and begged them to care for it.

They did what some people would think would be the exact opposite – they gave the child to some traveling actors. As alarming as that might seem, they thought that a traveling troupe would be a much better place for a child to grow up than with three of the greatest witches of Lancre.

And that would seem to be the end of it, really. The king is dead, with no one to contradict the original version of his death. The infant son of the king is stolen, never to be seen again. By all rights, the kingdom should move on. Assassination, of course, is perfectly natural in Royal circles, happens all the time. The kingdom shouldn’t even blink.

But it does. Not only does the kingdom blink, it is furious. Not the people, mind you. The people barely notice a new king, except for the parties and the slight increase in executions. The Kingdom. As a body is an amalgam of cells, a Kingdom is the whole of its people and history. Felmet hates the new kingdom he has acquired, with its gorges and trees and people you couldn’t bully no matter how hard you tried. He hates the Kingdom, and the Kingdom hates him for it. A Kingdom, you see, is like a dog. It doesn’t care if its master is a good man or an evil man, so long as he cares for the dog. Felmet actively detested the land and its people, and in return the larger entity that was The Kingdom hated him right back.

In the meantime, Felmet’s Fool, formerly the Fool to Verence, is showing him how words have power, and how that power could help break the animal kingdom he ruled. Cutting the trees down, for example, might be called “horrible” or “terrible” by the people – and the kingdom – of Lancre. But call it, “Planned deforestation for industry growth,” and that’s a whole new story.

Words have power, Felmet learns. The Fool eventually goes on to demonstrate the true power of words to the king.

And then there are the Witches, who are a threat to Flemet, in his own mind. He can’t kill them, he can’t torture them. But he can change how people think about them, and so he decides that a play is the way to go….

It gets a little complicated after that, but rest assured, it’s a kicker. Felmet is insane, and his wife is worse. Their plan to destroy the witches of Lancre goes beyond what the Puritans of Massachusetts could ever have come up with – altering their very natures by altering perceptions. And fate sticks her fingers in all over the place, as the Witches try to restore a true leader to Lancre – even if the true leader doesn’t even know who he is. 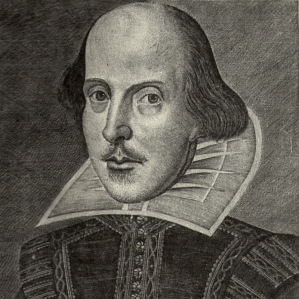 Oh, what Shakespeare could have done with Granny....

Not only does this book showcase one of Terry’s best characters – Granny Weatherwax – but it takes an interesting look at the way we can alter our perception of things merely by altering what we call a thing. Words shape the world, whether we want them to or not, and the right word in the right ear can shift the balances of history. As with so many of his other books, Terry gives us a profound philosophical insight and shows it to us as something we knew all along.

One response to “Review 119: Wyrd Sisters”