The Plague Dogs by Richard Adams

I really enjoy Richard Adams. Part of it is his writing – he has an excellent style and a definite gift for description. When he talks about a place, it is immediately obvious that he’s actually been there. He uses multiple senses to tell you what a place looks, sounds and smells like, the feeling of the damp earth and the rolling mists, the tastes that seep through the air…. Not surprising when one is writing a book where a pair of dogs are the primary characters.

And that’s another reason I like Adams. Lots of people write books about animals, personifying them and making them into almost-humans. But most of these writers tend to idealize the animals, put them into the sort of “noble savage” category which places humanity immediately in the wrong.

The fox is almost unintelligible. Enjoy that.

This book is about the intersection of animals and man, and asks a very important question: what is humanity’s responsibility towards the animals? While he may not know what the true answer is, Adams definitely knows which answers are wrong. The book begins in a scientific research lab, in the quiet hills of northern England, where any number of experiments are performed on any number of animals. Some of them are paid for by outside interests – cosmetics corporations, for example – while others are performed to, in the mind of the lab’s directors, further the scope of scientific knowledge. Adams’ utter contempt for this kind of activity is immediately evident when you read it, and he spares no detail in describing what happens in these experiments. Animals mutilated, burned, shocked, frozen, exposed to poisons in their air, water and food. Kept awake, asleep, isolated…. all just to see what would happen. And when they die, they are disposed of with no more thought than one might dispose of a burned-out light bulb.

One of the subjects is a large black mongrel dog which is being used to answer the great burning scientific question of, “What would happen if we kept trying to drown a dog but never actually let it die?” Rowf (having never had a master, his name is just the sound he makes) has a single companion in the lab, in the cage next to him – a small terrier who, having had a master before, has a name – Snitter. Snitter has been the subject of a far stranger experiment, and the brain surgery has left a deep scar across his skull and a deeper rift in his mind.

The two dogs manage to escape from the lab into the outside world, where they manage to survive, if only barely.

And normally, that would be the end of the story. But then Adams reveals his antipathy for bureaucracy and the modern media, for where both of these intersect, terrible phantoms and ghouls can arise. Worried farmers, whose sheep are targets of the two hungry dogs, call their representatives to get answers from the recalcitrant lab. The ministers talk and talk about it, and when word leaks out to a well-known London tabloid, the story explodes.

WAS the lab not working with many kinds of animals the night the dogs escaped, it asked. Among those animals, were there not RATS? And were those rats not the subjects of tests involving the horrible BLACK PLAGUE? CAN the laboratory ASSURE the taxpaying public that there is ABSOLUTELY NO CHANCE, none at all that the dogs are not infected with the virulent PLAGUE?

The newspaper’s answer, the one that will sell more copies, of course, is NO. And so, the two dogs, who were lucky enough to escape and canny enough to survive, become known nationwide as the Plague Dogs, subjects of a hunt which escalates beyond reasonable proportions. 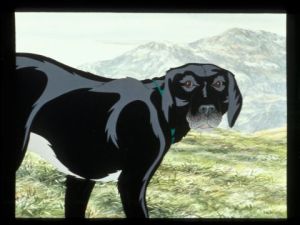 As much as this is an animal adventure story, a kind of twisted version of Homeward Bound, it is also commentary. There’s a lot of dog philosophy in here, for one of Adams’ gifts is being to get into the heads of the animals he’s writing. The two dogs agree on one thing – it is a dog’s place in the world to serve humanity. But how? Snitter, who’d had a good master once, believes that they are there to make humans happy, to bring love to a home. Rowf, however, having known nothing other than the laboratory, believes that dogs are there to be abused by humans for their unknowable purposes, and that by running away from the lab and the water tank, he has become a Bad Dog.

Also, looking at the world from a dog’s perspective is interesting. Snitter, for example, believes that the newspaper-boy delivers a paper to the Master’s house solely so the Master and Snitter can play a fun game. Isn’t that boy nice? And having known only suburbia, he is shocked that humans have ripped up the world and replaced it with all these green things and mountains and deep holes filled with water – which, of course, Rowf believes are used to drown unthinkably huge animals much as he was drowned. Adams asked himself the question, “How would a dog interpret the world?” and got a lot of great ideas from it.

And, as I mentioned before, there’s a lot of talk about humanity’s responsibility towards the animals. Should we use them for whatever purposes we wish? Of course not. Are we necessarily “better” than the other animals? More skilled, yes, more clever, certainly, but better? No. We are animals, and as such we cannot allow ourselves to place ourselves above the great interconnected web of life. We may never know what our purpose in Nature is, but we can know what our purpose is not.

One really interesting part of the book is a wonderful section near the end where the Writer and the Reader argue about the fate of the dogs. It’s a little meta-fictional, but it’s an acknowledgment by Adams that he knows how the story should end, and he knows how his readers want it to end. Reading it, it appears that Adams clearly thinks the dogs should die – not because they were Bad Dogs or anything like that, but because the vision of humanity that he constructed for the book demanded their deaths. Most of the humans in the story want the dogs dead, and letting that inevitable ending take place would be his way of saying, “See? I told you so.”

If I had to guess, though, he showed the original, “Dead Dogs” version to someone – his wife, his editor, his agent – and that person said, “No. Uh-uh, no. No no no. No.” And so Adams grudgingly breaks the fourth wall with a short narrative poem which is essentially him saying, “Fine, have your happy ending….” It’s a wonderful part, and I admit to getting a little choked up every time I read it.

Just a little, mind you.

Watership Down by Richard Adams

This is one of my top five books. Whenever anyone asks me, “What is your favorite book?” this is at or near the top. It was the first adult-length book I read when I was in Elementary school, and I have every intention of getting my hands on a copy for my goddaughter at some point soon. I remember watching the movie when they used to show it annually on CBS, way back in those days beyond recall….

Why should this book, of all the books I’ve ever read in my life, stay so dear to me? I have no idea. Perhaps because, even though its main characters are rabbits, it isn’t a “talking animals” book. Adams didn’t talk down to his readers, and assumed that they were ready to follow Hazel and Fiver wherever they went. And so, unusually for children’s literature, there is violence and loss and true danger in this book. Characters die. Unpleasantly. The rabbits live in fear of mankind and the Thousand, and accomplish great things despite. They do what no rabbit had done before, and find a new world for themselves. And, of course, are forced to fight for it.

Our heroes, you see, are living an idyllic life in a warren in England. They do what rabbits do – eat, sleep, mate, and entertain themselves. But one rabbit, Fiver, can see more clearly than others. He can sense danger, and grasp the shape of the future, and he knows that any rabbit who stays where they are will certainly die. With his brother, Hazel, Fiver and a small group of rabbits leave their home.

They do what rabbits never do – they explore. They go through dense woods and cross streams. They hide among gardens and search for the best place they can find to set up their new warren – a safe place, high in the hills, where they can see all around and the ground is dry. They seek to build a new society, as so many humans have done in our history.

And what’s more, they try to build the best society that they can. The need leadership, yes, but how much? How much freedom should the ordinary rabbit have to live its life? This question becomes more and more important when they meet the cruel General Woundwort, de facto leader of the warren known as Efrafa.

The battle that they have, choosing between personal liberty and the safety of the warren, is emblematic of so many struggles that have gone on in our world, and continue today. Through a tale about rabbits, Adams manages to tell us about ourselves, which is the mark of a great writer.

As cynical as I have become in my years, I still find this story to be honest and true. Adams isn’t trying to make an allegory or grind an axe. He’s trying to tell a good story about hope and perseverance and triumph over adversity, a story with – as Tolkien put it, “applicability” – that we can overlay onto our own lives and experiences. The fact that the main characters are rabbits is incidental.

Well, not really. Another layer to this story is the culture that Adams has created. The stories of Frith and El-ahrairah (which, I’ve just noticed, is misprinted on the first page of the contents in this edition as “El-ahrairah.” Weird) are sometimes deep and meaningful, sometimes fun and silly, but always relevant and rich, in the tradition of oral storytelling. There is a language to the rabbits, which is regularly used throughout the book (and one complete sentence in lapine – Silflay hraka u embleer rah. Memorable….) Adams did a lot of research into the social structure of rabbits and their lifestyles, making it as accurate is it could be….

Anyway, every young person should read this. Hell, older people should read it too. Every time I read the story, it moves me. I can hear the voices of the characters clearly and see what they see. I am inspired by the steadfastness of Hazel, the strength of Bigwig and the resolve of Blackavar. I find qualities in these characters that I would like to possess, and that’s as good a reason as any to love a book.

As a side note, this book is the reason I got into Magic: The Gathering way back in college. For a long time, I thought it was just a stupid card game, with no cultural or imaginative merit. Then I happened across a “Thunder Spirit” card, which had a quote from Watership Down at the bottom:

“It was full of fire and smoke and light and…it drove between us and the Efrafans like a thousand thunderstorms with lightning.”

Anyway, I thought, “Maybe there’s something to this,” and the rest was (very expensive) history….