Wheel of Time 03: The Dragon Reborn

Think about this for a moment: imagine there was someone in history who was truly terrible. The stories about him tell that he was personally responsible for destroying civilization as they knew it at the time. Thanks to him, men who could wield immense power went mad and broke the world. He brought down an Age of Legends in a catastrophe from which, three thousand years later, humanity has still not fully recovered. Mothers tell their children stories about him to make them grow up right. He is known as the Dragon, the Kinslayer, and the world fears the day on which, the Prophecies say, he will return. For that will signal the End of the World and the final battle with the Shadow.

Next to this guy, Hitler is a minor-league bully.

How would you feel if you found out that you were, in fact, him? In a world where reincarnation is a certainty, it’s possible to find out that you are an ancient hero reborn. Or perhaps a king, or a queen. Or maybe just Joe Peasant, who gets another ride on the Wheel. However it works out, you’ve discovered that you’ve pulled the unluckiest card in the reincarnation deck, and your future is to be hated and feared, and eventually to die in battle against the greatest evil humankind has ever known.

You might go a bit nuts. Rand al’Thor certainly does.

Not the inevitable madness of being a man who can channel, thank the Light, just the understandable mental breakdown that comes with knowing that you’re the doomed reincarnation of one of history’s greatest monsters. Rand is off to the great city of Tear, on the southern coast. In the great, power-wrought fortress that sits at its center, there is Callandor, the Sword That Is Not A Sword, and an object of great power for any male channeler who holds it. What’s more, only the Dragon Reborn can remove it from its suspension inside the Stone of Tear. By taking Callandor, Rand will finally prove to himself and the world that he is the Dragon Reborn.

His friends, in the meantime, think this is a mad plan. No army has ever broken the Stone of Tear, and the city itself hates and despises channelers. Moiraine knows that Rand could get himself killed in Tear, thus dooming the world. So, with Lan, Loial and Perrin, she chases after Rand to try and ensure that he fulfills his true destiny. 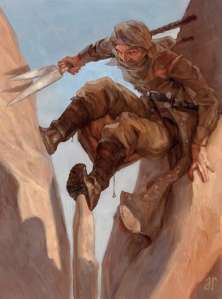 These guys will Mess. You. Up.

So it’s not for nothing that we don’t see a lot of Rand al’Thor in this book, despite him being the title character. In fact, except for occasional brief interludes, we don’t get a chapter from Rand’s point of view until chapter 55, just in time for the climactic final battle. I’m of two minds on this decision by Jordan. On the one hand, it frees up a lot of pages for the other characters in the book – Perrin gets a lot of time to shine, and Mat’s healing in the White Tower lets us get to know him a little better and get a better view of the White Tower and Tar Valon. We spend much more time with Egwene, Nynaeve and Elayne as they head down to Tear to chase down the Black Ajah, and get a good look at the Aiel, who will become much more important in the subsequent books.

On the other hand, however, we lose sight of Rand during what is a very important point in his character development – coming to terms with and accepting not only his identity as the Dragon Reborn but the horrible destiny that comes with it. In those brief interludes, we see that he’s being hunted by the Shadow, and has to remain on guard against its agents at all times. If we had followed him on this journey, much of what comes after would have made more sense. As it is, by letting him off on his own, Rand’s character suffers a great deal, and the reader’s ability to empathize with him is irrevocably harmed.

But on the third hand, maybe that was the whole point. No one can understand the Dragon Reborn – not Moiraine, not his best friends, not even the reader. From this book on, Rand will always be harder to understand than the other characters in the series, which may have been Jordan’s goal all along.

Another option, of course, is that Jordan wrote several thousand words of Rand’s journey to Tear and realized that just following this one guy all by himself as he tries to keep from going nuts wasn’t as interesting as we might have thought.

Google Image Search can be a tough place to search for pictures of women in fantasy….

A word, then, on a topic that is central to this series, and I figure it’s better to look at it earlier rather than later – women.

As a genre, fantasy doesn’t have a very good reputation when it comes to female characters. More often than not, women are either objects of the male protagonist’s quest, or they are hindrances to him. Fantasy remains a very male-dominated genre, and for female readers there are slim pickings when it comes to whom you can imagine yourself being. While Wheel of Time is still an andro-centric story, the roles and responsibilities given to female characters are enormous, and Jordan has created a world in which the status of women is far higher than in most fantasy worlds. It is a world where men and women are different, but equal, and neither is presumed to be superior to the other. This is neatly illustrated in the nature of the True Source, the energy that turns the Wheel of Time and thus is the engine of all creation.

The Source is divided into female and male, saidar and saidin. While saidin was horribly corrupted by the Dark One, it is repeatedly made clear that neither is stronger than the other, and that the greatest works of the Age of Legends always came when men and women worked together. Even on a non-magical scale, it is shown that the roles of men and women in this world are distinctly different, but occupying a certain stable balance that allows the world to work. In personal relationships too, there is no relationship I can recall where either the man or the woman can be said to be “in charge” (except in cases like Lan and Moiraine, where one has specifically sworn to obey the other). One of my favorite examples: Egwene, Elayne and Nynaeve have gone to Tear to hunt the Black Ajah. Far away, in Caemlyn, Mat learns that their lives are in danger from the Shadow’s assassins, and promises right there that he’s going to save them. Classic male reaction to a Damsel in Distress.

The women of WoT will have none of this nonsense.

Once he finds them, however, they have pretty much saved themselves – another five minutes or so and they would have done it. Mat’s entire involvement in their rescue from the unbreakable Stone of Tear and the horrifying Black Ajah was to unlock a door. He risked life and limb on a quest to rescue these women, only to discover that they don’t need rescuing. And in classic male fashion, he spends the next few books sulking about how they didn’t thank him for unlocking that pesky door. Well, not all the time, of course, but it certainly comes up again.

It’s not feminist lit by any means – Jordan tends to resort to behavioral cliches more with his female characters then male; women glare or sniff or tug their braids as a kind of neon sign that says, “THIS CHARACTER IS ANGRY NOW.” But I imagine that female readers of this series will have less trouble finding a character to identify with than they would with, say, Lord of the Rings, which has only one female character of any note (Eowyn – Arwen is barely in the books at all). And there’s a lot of “I guess I’ll just never understand women” talk from a lot of the male characters, while the female characters tend to hold themselves in slightly higher esteem. But for all that, I imagine there were plenty of female readers who saw themselves in these books, and who spent more than a little time wondering which Ajah they would choose, if only they could be Aes Sedai.

Of course, I am a man, so I could be completely wrong.