I’m putting these two together, because they really do form one larger piece – the craft of an artistic mastermind. Although perhaps “mastermind” isn’t the best word to use here. What do you call the person that they lock up when they’re about fifteen because they keep saying things to their teachers like, “The human body has ten thousand miles of blood vessels in it and I can feel my hate for you coursing through every one?” Or the guy who buys a dog, takes care of it, feeds it, loves it, and then one day realizes that the dog has been spying on him for the CIA for years and buries it in his backyard? Or the angry hobo who lurches up to your car as you wait at the stop light, a bucket of dirty, grey water in one hand and a rotten squeegee in the other and proceeds to molest himself with it, afterwards demanding that you gave him change, quote, “For the show.” 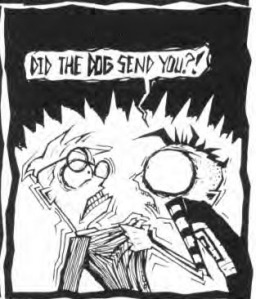 You thought I was kidding about the dog....

That kind of guy. What would you call him?

Whatever it is, welcome to the world of Jhonen Vasquez. Strap yourself in.

Johnny the Homicidal Maniac is the story of Johnny C., known to his very few friends simply as Nny. Nny is rail-thin, yet something of a fashion plate, and lives in a broken-down house with two evil Styrofoam doughboys, a dead bunny nailed to a wall, and a gateway to a creature of infinite evil somewhere in one of the many basements of the house.

In his free time, Johnny kills people in horrible and graphically interesting ways.

Not because he’s a bad person, necessarily. He does have the wall to feed, after all – a wall that has to be continually painted with fresh blood, lest the Evil come out of it. But he is, by his own admission, “quite horrendously insane.” He murders for many reasons, the Evil Wall aside. He murders the people who feel superior to others (while at the same time feeling that he is superior to them). The kills the smug and the self-possessed, the materialistic and the bored, the lowbrows and the posers and the jerks who seem to infest every corner of his world. And while he does kill with great glee and abandon, he occasionally takes the time to wonder if what he’s doing is worth it. If murder is all that his life has become. If maybe it would be better off to just end it all and kill himself.

Fortunately – or not – he has The Doughboys to keep him company. Two Styrofoam figures, painted by Nny, which talk to him constantly. One urges him to live and kill to his heart’s content. The other presses him to commit suicide and leave this world behind. Whichever wins will be freed from his plastic prison and reunited with his evil master. As a balance to them is Nailbunny, which is pretty much just what it sounds like – a bunny rabbit that Johnny bought from the pet store and then one day nailed to the wall. Nailbunny (or at least its floating head) is the voice of reason in Johnny’s life, urging him to be suspicious of the Doughboys and all they want. Despite his nihilistic view of the world, Johnny discovers that he does indeed have a purpose in life. Just not a very good one.

Johnny is, naturally, hard to sympathize with. Part of that comes from his almost cavalier attitude towards killing, but more than that, he’s rather adolescent in his view of the world and how it works. Like so many teenagers, he has yet to grow a buffer between himself and the world, and cannot differentiate malicious acts from merely thoughtless ones. He feels every barb and every sting like hooks in his flesh, and the only way he is able to deal with it is through murderous rage. Reading it as an adult who remembers his teen years, I can certainly see where Johnny is coming from, but at the same time I wish he’d just grow up and learn to live in the world like the rest of us.

Which is a statement for which Johnny would no doubt gleefully murder me.

One of the major themes of these comics is conformity and humanity’s need to follow each other into the abyss. Hypocritical characters dressed in all the latest fashions snub people who are slaves to public opinion. One of the worst offenders, a recurring character named Anne Gwish, embodies the modern Goth poser who shuns everyone while despairing that no one talks to her. Johnny’s world is filled with these people and they all need killing. Even people who don’t deserve death might end up falling to Johnny. In one of my favorite stories, “Goblins,” a man who was chosen at random is strapped to a truly terrible machine, and faces his impending death with enviable conviction.

Johnny the Homicidal Maniac reads like an extended teenage revenge fantasy, if a highly philosophical and entertaining one. Eventually you figure out that, as Vasquez himself says, “He’s not a loser, he’s simply lost.”

Themes of identity and social connection continue in the book SQUEE’S Big Giant Book of Unspeakable Horrors. Young Squee (whose real name is Todd) is Johnny’s neighbor and is featured in the very first JtHM story. Squee is a pitiful child, with parents who resent his very existence and a school that is constantly trying to crush the spirit out of him. Squee lives a life of unending terror as he’s beset by nightmares, aliens, his cannibalistic grandfather, openly hateful parents, and a world that never seems to make sense. It is his young burden to have to live in a world created by Jhonen Vasquez.

Somehow, though, little Squee manages. Manages to get himself locked into an insane asylum, yes, but manages nonetheless.

The second half of the book features Vasquez’s filler strips – one or two-page stories of pain, heartbreak and horror. Poor Wobbly-Headed Bob tries to convince the rest of the world to accept that he’s smarter than they are, and can’t understand why they want to kill him. True Tales of Human Drama are just that – dramatic, probably human and god I hope they’re not true. Happy Noodle Boy is a free-form anarchistic story, allegedly drawn by Johnny himself, and I can never manage to finish one. My favorite filler strips are the Meanwhile…. strips, one of which features two elementary-school crossing guard children enacting the final battle between two entities of pure evil. Another depicts a first date gone horribly, horribly awry as a case of gastrointestinal distress engenders one of the best attempts to save face I’ve ever seen. A horrible, lying vampire, the revenge of the pinatas, and a case of childhood attachment issues gone horribly wrong, these are some of my favorite works in the whole series. 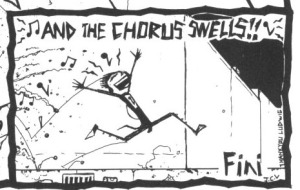 Good old Ludwig van B. Perfect for any occasion - even mass murder.

The work of Jhonen Vasquez certainly isn’t for everyone. Even his famous animated program, Invader Zim, is a little weirder than most people are willing to accept for a children’s show. It rewards patient reading and careful attention to the artwork. Which, I might add, is distinctive and disturbing and wonderful. Vasquez has created a style that’s cartoonish and yet horrible, in which childlike glee can be rendered next to heart-stopping horror, and we can perfectly believe that they exist in the same world.

It’s strange, horrible and funny all at the same time. If you’re interested in something out of the ordinary, I can definitely recommend this.