Wheel of Time 08: The Path of Daggers by Robert Jordan

Again, spoilers. Just putting that out there.

I knew I shouldn’t have left off reviewing this for a few days. I have almost forgotten what happened in this book.

Oh, I know the events that transpired – Borderland kings and queens assembling to deal with Rand in some mysterious way; the using of the Bowl of the Winds to finally change the weather – and the terrible bargain that it fulfills between the Sea Folk and the Aes Sedai; the second invasion of the Seanchan from across the sea, this time into Ebou Dar; Perrin building his army to bring the violent Dragonsworn who follow The Prophet back to Rand….

And that’s all just in the first ten chapters.

It’s not a matter of, as is so often complained about, “nothing happening” – plenty happens in this book. In fact, a lot of what happens in this book directly sets up the rest of the series, and marks some major changes not only in the plot but in the world of the story itself. The problem is that the format of the first half of the series – a reasonably self-contained book that has a clear story climax and some sense of closure by the end – has completely fallen by the wayside. At this point, Jordan is writing for the series as a whole, and has only divided it up into separate volumes because TOR can’t sell it any other way.

This does have its advantages, but the disadvantages are greater. So of all the books thus far, I’d have to say that The Path of Daggers is my least favorite. Again – and I want to keep stressing this – not because there’s nothing going on. There’s plenty going on. It’s just not all that easy to keep track of, nor is it necessarily interesting to read.

The worst example of this, I think, is the Seanchan invasion. To catch you up, the Seanchan are an empire that lives in the land across the sea. Descended from the greatest king in history, Artur Hawkwing, they have returned to reclaim their ancestral lands. To do it, they have brought an army that has been trained by a thousand years of battle, creatures that seem like monsters to do their bidding, and leashed women who can wield the One Power as a weapon. Even under normal circumstances, this would be a problem. For Rand, circumstances are far from normal. The Seanchan mark a serious complication in his quest to bring all the nations under his rule in time for the Last Battle, so he has to show them who’s boss.

Surprisingly, with a massive army and a corps of Asha’man – men who can wield the One Power to destructive ends – dealing with the Seanchan becomes a tedious chore to read. Perhaps in an attempt to capture “the fog of war,” Jordan has us jumping from place to place and time to time, from a variety of points of view. What could have been an awesome clash of armies, men and women really going all-out with the One Power in battle for the first time becomes a trial to read. Not least because Rand al’Thor has become a thoroughly unlikable character.

In the middle of the book, Sorilea, the most senior and powerful of the Aiel Wise Ones meets with Cadsuane, an Aes Sedai so formidable that she has become a legend in her own lifetime, and they agree that Rand has become too hard. “Strong endures,” Sorilea says. “Hard shatters.” They vow to teach Rand and the Asha’man to remember laughter and tears, and if you ask me they’re not doing it a minute too soon.

I’m ignoring you for your own good, baby.

Rand is doing his best to harden his heart by this point, and not without reason. He’s got armies at his fingertips, and his decisions will kill a lot of men. He’s got these Asha’man to deal with – men who will inevitably go mad from using the One Power – and he can only bring himself to think of them as weapons. There’s his issue with allowing women to come to harm. Instead of being an endearing (if somewhat chauvinistic) character trait, it just becomes tedious and repetitive. Thankfully, the Maidens of the Spear will later beat the hell out of him for trying to treat them so delicately. In this book, it is almost impossible for me to actually like Rand, and makes me wish that Mat hadn’t been given one book off to recover from having a building dropped on him.

Other than the complete mess that is Rand’s storyline, the rest of the book is actually quite interesting. Elayne has finally come home to Caemlyn and is preparing to take her mother’s place as Queen of Andor. We have the rebel Aes Sedai preparing for all-out war with the White Tower, and Egwene consolidating her hold on the rebels. In the White Tower itself, a hunt for the Black Ajah has begun as Elaida does what little she can to free herself of the influence of her Keeper, Alviarin. 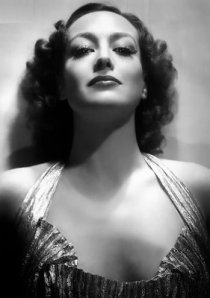 Tell me Joan Crawford wouldn’t be a perfect Elaida.

A word about Elaida do Avriny a’Roihan, as an aside. No one likes her, and I can understand why. I don’t like her either, as a person. She’s arrogant to the bone, impatient, self-absorbed, power-hungry, and completely disregards anything that doesn’t conform to what she already believes is true. This mode of thinking leads the White Tower towards utter disaster, from the botched abduction of Rand to the loss of fifty sisters to the Black Tower. Elaida risks being stilled and deposed should the Hall of the Tower find out about her bungling, and she would deserve it, if not more. The only thing keeping her from that fate is the machinations of her Keeper of the Chronicles, who is more than happy to put Elaida under her thumb.

Having said that, it was this book that made her into one of my favorite characters. I still wouldn’t want to sit next to her on a long airplane ride, but what happens to her in this book made me utterly devoted to finding out her ultimate fate in this series.

That pretty much sums it up, actually – taken as a whole, this book is pretty tough to get through and probably the low point in the series, despite having some of the most interesting and pivotal events take place within its pages. How Jordan managed to do this, I’ll never know. All we can do is take the long view – all of this will benefit the series as a whole, if not necessarily the book that contains it.