Review 152: The Moon is a Harsh Mistress

The Moon is a Harsh Mistress by Robert Heinlein

What would you do if you had access to the greatest supercomputer ever built? A computer so complex and intricate that it finally gains full consciousness – and only you knew about it? Would you use it for your own nefarious purposes and hack your way to riches? Would you try to teach it how to be human? Would you tell it jokes? Or would you use it to start a revolution that frees your people in the Lunar Colonies from the yoke of Terran oppression?

Manuel Garcia O’Kelly Davis never really meant for that last one to happen. One of Luna’s best computer technicians, Mannie’s philosophy was “Keep mouth shut” when it came to matters political, and never considered the political fate of the Moon to be something he needed to worry about. When he attends a meeting of Lunar dissidents, people protesting against the rule of the Earth-based Lunar Authority, he goes more out of curiosity than cause. An attack by Authority troops drives him together with lifelong revolutionary Wyoming Knott and anarchist professor Bernardo de la Paz, and together they hatch a plan to take down the Lunar Authority and make Luna into a sovereign nation above Earth.

Would he have been as scary if he'd been named Mike? Probably.

To do so, they’ll need the help of Mike, the world’s first – and only – sentient computer. He knows the odds, he can run the scenarios – with Mike on their side, the people of Luna can gain their independence and create a new nation in the grand tradition of old.

A friend of mine said that this was the best political science textbook that she’d ever read, and in many respects she’s right. This book packs a lot of social philosophy into three hundred pages, and Heinlein requires you to be pretty quick on the uptake. From Manny’s clipped way of narrating the story to all the new lingo and concepts that are necessary for Lunar life, the reader needs to pay close attention in order to get the full impact of what’s going on in the book.

In a way, this book is Heinlein asking the question, “How do new nations begin?” Historically, there are two ways: top-down and bottom-up. In the first case, a person or people of strength brings a group of citizens to become a political entity. In the second, the people themselves rise up to overthrow their former masters. Most revolutions are a mix of the two, really, and Luna’s is no exception. The very charismatic Adam Selene (Mike in disguise) and the brilliant Professor manage to bring the people of Luna together in order to rid themselves of the Lunar Authority.

What makes it very interesting is that the book is pretty much a how-to book on insurgency and revolution. They work out an improvement on the traditional cell system of a conspiracy, and how to make it as stable and secret as possible, while still maintaining reliable communications. They figure out how to involve people in the revolution indirectly, harnessing the energies of everyone from children to old people. Working against a better-armed and more powerful enemy, Luna’s revolution is a textbook model of how to overthrow your oppressors and gain your freedom. 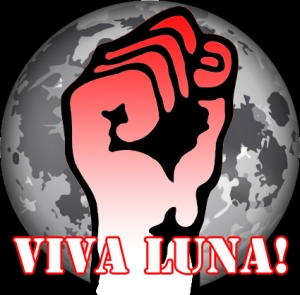 Of course, once you have your freedom, then what do you do with it? How do you run your new country, and how do you make sure that your freedom can be maintained? How do you build a government and write a constitution and establish trade and do all the other little things that have to happen if you want a country all your own?

What’s more, Heinlein puts forth a new society that is radically different from the ones we know now, and by necessity. With drastically different demographics and gravity, life on Luna cannot follow the same rules as life on Earth. This new life includes a near reverence for women, marriages that span not only multiple partners but multiple generations, and a spirit of individualism that would make the most grizzled pioneer proud. Life on the moon, as the title implies, is not easy. Many of those who come to Luna do not survive. Those who do, however, become the backbone of a new nation that will one day be the crossroads of the solar system.

It’s a dense read, but fun, once you get used to the narrator’s mode of speech. Manny often leaves off pronouns and articles, making him sound very choppy and direct. And a lot of it is done in speeches and Socratic dialogs between the Prof and whomever is unlucky enough to get in his way. I’d say that the greater part of this book is discussion of how to have a revolution from the point of view of the moon, and a look at how Heinlein thinks a society should be ordered.

Other than being very narrative-heavy, which modern readers might find somewhat tiring, there is one point about the book that didn’t sit right with me. It didn’t ruin the book, necessarily, but it put a big asterisk next to everything that Heinlein was trying to say. That asterisk is Mike.

Mike is a truly marvelous AI. He is not only self-aware and blessed with a rather rudimentary sense of humor, but he is tied into all of Luna’s main systems. His processing speed and memory are exceptional, and while he doesn’t really care one way or the other about rebelling against his owners, he does think that organizing a rebellion might be an entertaining diversion. He’s a good character, really, but he is entirely too powerful. 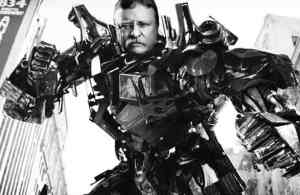 RTR-9000 would have liberated the Earth while he was at it, just because it was in his way. (via Cracked.com)

All of the problems that traditionally plague conspiracies, undergrounds and rebellions are solved by Mike. He knows the probabilities of success and can run thousands of scenarios in a moment. He is able to set up a moon-wide communications system that is completely secure. He can tap into the Lunar Authority’s database while at the same time keeping the Rebellion’s data secret. What’s more, he can be trusted to know everything about everyone in the group – he cannot be bribed or drugged or forced to name names under interrogation. He can organize the bombardment of Earth with pinpoint accuracy, bring down attacking ships and organize attacks all over the moon.

With Mike at their side, the rebels couldn’t help but win, and I found that a kind of hollow victory, in a narrative sense. I kept waiting for Mike to be compromised – his power disconnected or his actual intelligence uncovered – or for him to change his mind about helping the rebels. One way or another, I wanted the rebels to win Luna without the help of their omniscient computer conspirator. As it is, Mike pretty much delivers the Moon to its people, and then vanishes without a trace. That’s not to say that the human element isn’t necessary – even Mike couldn’t have won independence without them – I would rather have seen a wholly human revolution. 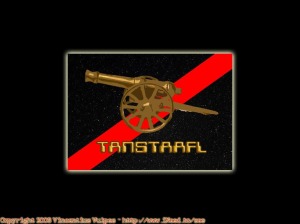 The flag of Luna. Seriously.

Other than that, though, it was a very good read, and it’s a book that ties into a lot of Heinlein’s other works. Many concepts that are key to Heinlein’s vision of the world are in this book – the freedom of the individual to direct his or her own life, the benefits of polygamy over monogamy, and of course the notion of TANSTAAFL – “There Ain’t No Such Thing As A Free Lunch” – which is arguably one of the governing principles of the universe. In this book, Heinlein asks the reader to do more than just enjoy a good story – he demands that the reader think about the message as well. And that’s what makes Heinlein one of the greats.

If you’re looking for some essential science fiction and you like your politics rough-and-tumble, check this book out.

3 responses to “Review 152: The Moon is a Harsh Mistress”