Song of Susannah by Stephen King

I think that every long series has to eventually include a book like Song of Susannah. It’s the weak book, the one that you have to have, but would rather you didn’t. The one that pretty much exists to get you from Point A to Point B, which resolves some earlier issues and sets up some later conflicts, but which – by itself – isn’t nearly as good or as much fun to read as the books that either preceded or followed it. I call it a “bridge book,” and I suspect that they are somewhat inevitable.

But before getting into all the heady analysis ‘n stuff, let’s see what this book is about.

Directly following the end of Wolves of the Calla, our ka-tet is split. Susannah, possessed by that strange spirit who calls herself Mia, has taken the supremely powerful Black Thirteen and used it to open a magic door to New York. It is there that she hopes to have her child and have the raising of it, before it grows up to destroy the world. Everyone else, of course, is concerned for her safety, but there is one other thing that needs to be done – the vacant lot in Manhattan and the rose that grows there must be protected. This rose represents one of the two Beams that remain to hold up the Dark Tower (and thus all of existence), so its safety is paramount.

The other Beam just happens to be Stephen King himself. But we’ll get to that….

Roland’s party splits up – Roland and Eddie go to rural Maine to find Calvin Tower and secure proper ownership of the vacant lot. Jake, Oy, and Father Callahan follow hot on Susannah’s heels to New York City to try and save her from the horrible death that no doubt awaits her there. Horrible death awaits all of them, truth be told, but one does what one must in pursuit of the Tower.

Jake, Oy and Callahan’s story is the far more straightforward one. They go to New York and follow Susannah/Mia’s psychic trail to Black Thirteen, which they dispose of in a manner that should bring a grim smile to all 21st-century Americans. They then go on to the Dixie Pig, a restaurant-slash-portal to a dimension of hell and pain, where they expect to be gunned down the moment they go through the doors. Pretty cut and dried, really.

Roland and Eddie, however, have the much more mind-bending task of meeting their maker. Literally. 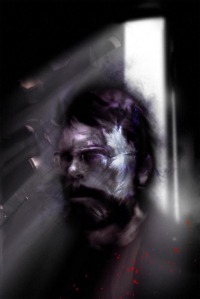 As a side-quest to securing legal possession of the vacant lot, they learn that King lives nearby and decide to pop in and pay him a visit. This kind of freaks King out, but rightfully so. To him, Roland is a character who haunted his mind, and a few pages of a manuscript that has languished in storage for years. King had given up on The Dark Tower, and never expected to pick it up again. Until, of course, its main character showed up, insisting that his story be finished.

To me, this was the most interesting conceit of the entire series. The idea of characters breaking through the fourth wall and entering “the real world” is nothing new, nor is having them ask some rather pointed questions of their creators. But it’s another thing for those characters to not only meet their creator, but to do so before he’s actually written about them up to the point where they’re meeting him.

In short, not only is King the embodiment of one of the last Beams holding up the Dark Tower, he is also an avatar of Gan, the primal force of order and righteousness in the universe. Through King, and the story of Roland and his ka-tet, Gan is trying to keep the Tower up against the forces of Discordia, as embodied by another King, the Crimson King. These two Kings – one unknowing, the other knowing – are locked in a fight to the death, with the universe at stake.

Throughout all of this, Susannah is having her own troubles in New York. Mia has gained control of her body – to the point where she is able to manifest the legs that Susannah lost long ago – and is determined to have her child. She has an appointment to keep with the agents of the Crimson King, and she believes that she will finally achieve that holy state for which she had gladly given up her immortality – motherhood. Susannah, on the other hand, knows that whatever is brewing in Mia’s belly is a threat to Roland, and will do whatever she can to stop the birth, or at least turn Mia against her chosen destiny.

Depending on the kinds of books you like reading, Song of Susannah will either be tolerably good or downright unpleasant, and this is mainly due to its rather fractured structure. The three plot threads don’t intersect directly once everyone leaves the Calla, and don’t have any kind of resolution once you get to the last page of the book. As a friend of mine put it, “There’s no ‘there’ there.”

The other volumes, like most standard-issue novels, has a resolution at the end. You can close the book and be able to tell people, “The characters achieved this, and it was fairly conclusive and interesting.” Of course, a series always has a greater conflict – the series-level conflict – that won’t be resolved until the last volume, but each individual book needs to have its own setup, conflict and resolution, with enough loose ends to get us into the next book.

Song of Susannah doesn’t really do this. The matter of the vacant lot is a fairly simple legal matter, which is not only easily resolved but also kind of dull, once you compare it to everything that has gone before. The problem of Black Thirteen is done away with pretty easily as well, which doesn’t really befit an artifact that we have been told possesses immense evil power. And while Susannah doesn’t prevent Mia from making her appointment at the Dixie Pig, she does manage to plant the seeds of doubt in the woman’s mind. 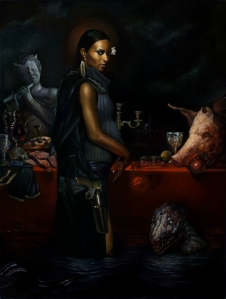 In short, what is achieved in this book is not up to the level of what we have come to expect. The dramatic escape from the decaying city of Lud, the horrible tragedy of Roland and Susan in the Mejis, the valiant stand against the Wolves – all of these are proper climaxes and proper resolutions. The sole purpose of this volume is to bridge the gap between Wolves of the Calla and The Dark Tower, and the only reason it ended where it did was because, well, you have to end it somewhere.

Having said all that, I enjoyed reading this book, and tore through it at record speed. I thought Susannah’s chipping away at Mia’s confidence was well-handled and made a lot of sense. Jake, Oy and Callahan preparing for their Last Stand and their likely deaths was great, and the whole meta-fictional issue of characters meeting with their creators is just the kind of thing that really digs into my brain and gets it going. And while the book may have been less carefully focused than the other editions of the series, it must be remembered that I am a long-time veteran of the Wheel of Time series, which has so many sub-plots, side-plots, secondary plots, divided parties, prophecies, histories, secrets, societies, ancient enmities, mythical forces, Artifacts of Unimaginable Power, questionable plot elements and unanswered questions that it makes The Dark Tower look like one of Aesop’s fables.

So I do have an unfair advantage.