The Long Earth by Terry Pratchett and Stephen Baxter

It is said that the population of the whole world, if packed together into a city of the same density as New York City, would fit into the current boundaries of Texas. This Texan mega-city wouldn’t be a pleasant place to live, and there’s the challenge of infrastructure and living space and waste management, but the point is clear: there’s a lot more space on Earth than we think there is.

True, a lot of it is unfriendly to us – ocean, desert, ice, mountains, New Jersey – but still, despite our habit of packing ourselves into tightly-bound metropoli, there’s a lot of room on this earth to spread out.

Now imagine there was another Earth just a step away. A simple exertion of will, perhaps aided by a small device that anyone could make at home with a potato and some spare parts, and you’re in a new world, untouched by human hands. You’d be standing in the same place you left from, but on another Earth. And if you don’t like that one, well, there’s another Earth just a step away. And another. And another. An infinity of Earths, each one so very slightly different from the one you left, each with its own story to tell. 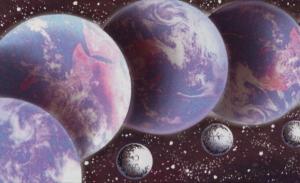 I’ll take the fifth Earth on the left. It’ll go well with my living room.

With the potential for an entire planet per person, what would that do to the world? Who would go and who would stay? What would happen to the “original” Earth, or Datum Earth as it’s called in this book? The ramifications of the Long Earth are far-reaching and unsettling indeed, as is the quest to map it.

Of the people on Datum Earth, most are able to step with the aid of a Stepper, a small box that they can build from freely available parts using plans that were posted to the internet by a mysterious engineer named Willis Linsay. As long as you follow the instructions properly and to the letter, you should be able to step from Earth to Earth with ease and only a minimum of discomfort.

The first wave of devices were built by kids, prompting an initial missing-children panic as kids popped out of this universe with hastily-built Steppers, completely unprepared for what they were getting into. Soon, though, more and more people were stepping out, eager to explore these strange new worlds.

At the forefront of this wave of colonization were the rare few who could step from world to world without a Stepper. One of these is Joshua Valienté, who was propelled to fame when he rescued children from their first journeys on Step Day. Joshua is hired by the Black Corporation to explore the Long Earth. With the support of Lobsang – formerly of Tibet and now an artificial intelligence – Joshua is going to step as far as he can go and see what there is to see at the distant ends of the Long Earth. 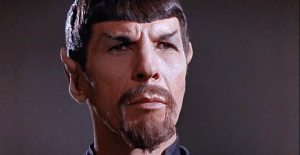 And for every one of you, there is another one with a goatee.

This is a genus of book that I really enjoy – one that takes a simple, straightforward idea and tries to find all the angles of it. To that end, Pratchett and Baxter look at how the people, governments, and businesses of Datum Earth adjust to this new reality. And some of the questions are decidedly thorny. Is America still America on all Earths? If someone commits a crime in an alternate New York, could they be prosecuted by the NYPD? What happens to the value of commodities such as wood or gold when you have a nigh-infinite supply of it? And what happens to a nation when its people start stepping out en masse?

There is a sub-plot in the book, following police Lieutenant Monica Jansson, who becomes the law’s expert on stepping, with all the challenges that come with it. For example, what can you do to stop someone from stepping one world over, taking a few steps to where a bank vault should be, and then stepping back? How do you make a space step-proof against intruders? And what do you do with the increasingly disgruntled percent of people who can’t step at all? That’s to say nothing of the scam artists, the escapees, and the people who just abandon their lives to walk the Long Earth. It’s a concept rife with possibilities.

Each Earth is slightly different, representing an Earth that could have been. Some are steaming jungle, others arid wasteland and still others are lush and perfect for agriculture. There are animals that claim descent from the megafauna of North America, from our own ape-like ancestors, and from dinosaurs, and others still that are unlike anything on the Earth we know. On none of them, however, are there humans – only the Datum Earth has those.

You can have my gun when you pry it from Anton Checkhov’s cold, dead hands!

As great as the concept is, though, I found myself disappointed by the end of it. It seemed like Pratchett and Baxter missed a lot of good opportunities for the story, failed to fire at least one of Chekhov’s guns, and let the Datum Earth plot line with Monica Jansson go woefully under-explored. Furthermore, while the Big Bad at the end was certainly big, it wasn’t that bad, and it was dealt with in a rather perfunctory and, in my opinion, unfulfilling manner. The ending was flat, with a bunch of loose ends that really should have been tied up, and there was even one question that came to mind that seemed so painfully obvious that I was shocked none of the characters thought of it: the Stepper boxes refer to the alternate Earths as being “west” or “east” of Datum Earth, and are built with a three-point toggle switch.

If there’s a west and an east, how about a north and south? What if you had four choices from any given Earth instead of two? I can understand leaving that option out for reasons of narrative simplicity, but it seems like such an obvious question that I’m surprised it wasn’t even raised.

Overall, I think the book fell under the same curse as so many of Neal Stephenson’s works: an amazing idea, done really well until the authors had to figure out how to end the book. There’s no real climax to it, no sense of fulfillment and achievement. Just a feeling like they had to stop somewhere, so they did.

That said, if they’re clever, they’ll make this a shared world project. I would love to see lots of different authors take a crack at some Tales of the Long Earth, precisely because it’s such a useful idea. There are so many stories that can be told, including the ones that got short shrift in this novel. Let’s hope we get to see that.

———-
[Jansson] opined, ‘Oh.’ This response seemed inadequate in itself. After some consideration, she added, ‘My.’ And she concluded, although in the process she was denying a lifelong belief system of agnosticism shading to outright atheism, ‘God.’
– from The Long Earth by Terry Pratchett and Stephen Baxter