In the introduction to this book, the author states that he truly admires William Shatner – he states that Shatner is a man who has made a career out of caricaturing himself, remaking himself over and over again with no looking back, no shame and – as far as we know – no regrets. He finishes by kindly asking William Shatner not to sue him.

I don’t think he has too much to worry about, really. This book is a quick, fun read that, while not necessarily painting William Shatner in the best of lights, certainly pays homage to his long and varied career.

The story goes as follows: William Shatner is on his way to the very first ShatnerCon, a convention celebrating his life and works. It is a convention mobbed with fans, devotees who are there to see their idol, whether he caught their hearts as T.J. Hooker, Captain Kirk, or the host of Rescue 911. In the new Cathode-La convention center, tribute can be paid in full to William Shatner, a man who has changed so many lives.

But there are those who do not adore Shatner. They don’t like him or even tolerate him. They are the Campbellians, known by the bloody stumps where their right hands used to be and each known only as Bruce. They hate William Shatner with a passion that borders on madness, and seeing him dead is not nearly enough for them – they want his entire body of work to never have existed. Their weapon is a Fiction Bomb, a metaphysical WMD that can erase stories from existence. No one remembers them, no one knows they ever existed. Should the Fiction Bomb succeed, William Shatner’s entire body of work would cease to be. And so, in short order, would he. 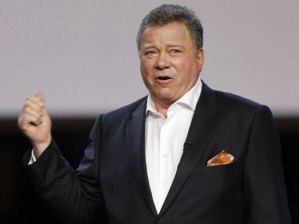 But what if a Fiction Bomb should go wrong? What if that interface between fiction and reality should be breached, spilling its contents into what we commonly call the Real World? In that case, dozens of William Shatners – every character the man had played – would emerge in our world, with only one thought on their minds: Destroy the real William Shatner!

This book is a very quick read – only eighty-three pages – but it certainly packs in a lot of action, and as works of fan-fiction go, it isn’t too bad. Because that is most assuredly what this book is – fanfic. Burk has a very basic concept here – get all of Shatner’s characters out to kill him. Simple. Add lots of blood and gore and guts, because that’s always fun, and you have some entertaining reading. This is the very best kind of fanfic, really – you know it’s just a send-up, never intended to be a serious work of literature. Sit back and enjoy the ride.

It suffers from some serious editing problems, though, and Mr. Burk would have done well to have hired a good proofreader. There are some very basic grammatical mistakes, dropped plurals and a few sentences that just don’t make sense. To a regular reader, it might not be important, but to someone whose bread and butter is the proper use of English, it’s kind of glaring. But then my expectations weren’t all that high – I went into this expecting a rollicking adventure and that’s what I got. Complaining about the grammar in a book like this is like complaining about the quality of the vegetables in your Big Mac.

Still, there are some redeeming points to it, above and beyond the weirdness of the whole thing. The beginning of the book does a very good job at setting up a real dreamlike atmosphere – a building that covers a hundred city blocks and has a parking lot that stretches out as far as the eye can see. Upon reaching the convention center, Shatner finds out that he is already late, and is led through a maze of hallways that result in almost instant disorientation. He has to sign hundreds of photographs for hours on end, and ultimately faces off with his own doppelgangers. Burk has reached into the bag of common nightmares and put together a scenario that is both familiar and disarming, which propels you through the rest of the book. After all, if you’re struggling to keep up with events, think about how Shatner must be feeling?

And of course, one can’t help but wonder if this is a commentary on the very nature of the actor/fan dynamic. Who is William Shatner, after all? Depending on who’s looking at him, he could be Kirk or T.J. Hooker, Denny Crane or Buck Murdock, the guy who saw gremlins on his plane or the guy trying to sell you cheap airplane tickets. On top of that, Shatner has another character to maintain – Shatner as a public figure, the guy who goes to conventions and book signings and does guest spots on TV shows.

Who is the real William Shatner? Who are any of us, really? In this age of online presences, there could be electronic doppelgangers of ourselves all over the internet. The person that your Twitter followers believe is you is not necessarily the same person that the people on your Mad Men slash fic forum know. You present a different face to your Facebook friends than the people you know in your World of Warcraft game, and like Shatner in this story, you ultimately have no control over the different renditions of you that other people see.

The good news, of course, is that those different Yous are unlikely to rise up and try to kill you.

Ultimately, this book has no over-arching message about the nature of identity in a world where different versions walk around without our knowledge or consent. I don’t think that it was ever Burk’s purpose to write a treatise on the modern concept of identity, but rather to write a quick, bloody thriller about William Shatner. So, it has no real lessons to teach us other than that if you see a deranged Captain Kirk approaching with a lightsaber (and how that got in there, I’ll never know – a little artistic license for the sake of awesomeness) you run away. Very fast.