Review 192: The Audacity of Hope

The Audacity of Hope by Barack Obama

I know, I was supposed to have read this, oh, back in 2007 or ’08 when everyone else was reading it. And I thought about it, really I did. But the cynic in me thought, “Come on – what do you think it’ll be? It’ll be a 400 page sales pitch about why he should be President.” I lost faith in our elected officials a long time ago, and if I wanted to learn about Obama, I would rather have done so from a third party, rather than reading a self-aggrandizing autobiography about how awesome he is.

In a way, my Cynical Self was right – this is a sales pitch for Barack Obama. I don’t know if he was giving the Presidency serious thought when he was writing it, but he could have re-titled the book “Why You Should Vote for Barack Obama” and it would have been perfectly appropriate. Given that he wrote the book after his exceptional keynote speech at the Democratic National Convention, however, it is very likely that he wrote it with higher office in mind.

What an unpleasant little man he is…

The table of contents reads like a campaign platform, with chapters titled simply, “Values” or “Faith” or “Family,” and each chapter deals not only with Obama’s views on the topic, but his personal experiences dealing with it. In “Republicans and Democrats,” for example, he talks about how the Gingrich Rules bled out from Washington to infect his own state of Illinois, and how hard it was to get anything done when Republicans and Democrats viewed each other as enemies, rather than as different actors in the same play. In “Opportunity,” he talks about meeting the guys over at Google who can’t find enough American software engineers and the auto workers who can’t see their jobs surviving in the new economy. In “Family,” he talks about the challenges he faces as a political husband and father, and the more serious challenges facing other families around the country.

Make no mistake – this book is, first and foremost, an answer to the question “Who Is Barack Obama?” And it’s a very comprehensive answer. We get not only his positions on the issues of the day, but also his personal history (and how it informs his opinions) and a good sense of how the man looks at the world. For an angry, post-Bush Liberal, however, it is immensely, frustratingly even-handed.

You should see me – I’m grinning like an idiot already.

I’ll admit – if I’m feeling a little low, I think about my favorite things: a good book, a thunderstorm on a summer afternoon, sunlight filtered through autumn leaves, and Dick Cheney in an orange jumpsuit and manacles, preferably tarred and feathered. With bells on.

It’s a natural human impulse, I think, the drive to give as good as you get, and after the last eight years of being on the side slandered every time it questioned authority; of being a supporter of elected officials who have been the target of right-wing vitriol since I was in college; of having to defend the idea that government can be a force for good against thirty years of the incessant, endless, Reaganite drumbeat of Government Is Bad, what I really, really want is to see some heads roll. I want shame and ignominy visited upon those who put their own twisted and medieval ideologies ahead of governing the country. I want to see talking heads and pundits begging on the streets for spare change while the rest of us soar into a utopia of rational understanding.

And Barack Obama won’t let me have that. Dammit.

There are a lot of people annoyed with President Obama right now, and not only from the opposition party. There are Democrats who are frustrated with his pace and what they perceive as his lack of action. All of those people really should have read this book before they got behind him. I’m sure they still would have thrown their support to him, but they would have known better what to expect – a centrist, deliberative politician who plays the long game in lieu of scoring empty political points by, just to pick an example out of thin air, sending Karl Rove to Gitmo. 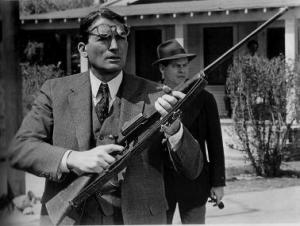 Not a bad role model, if you ask me.

Throughout the book, he emphasizes that while he has indeed picked a side in our political system, he can also see the value in opposing opinions. He knows that there is merit to some GOP ideas, and that they have simply lost their way at this time. Rather than dismiss ideas that don’t match his own, he looks for where his ideas and those intersect, and tries to find some kind of common ground to work from, in the hopes that a synthesis can lead to good governance. He is constantly questioning his own assumptions and trying to examine his own biases, seeing the world in the manner of Atticus Finch. He admits that no real problem has a simple solution, no matter how much we wish it were otherwise. And above all, he knows that hope alone won’t make the world better. Only deliberate, consistent action will lead us to a better country. Hope merely points the way.

Reading this book is a glimpse not only into the mind of Barack Obama but, in some sense, into the mind of everyone who wants to occupy higher office. A great deal of the book focuses not only on his positions and how he has come by them, but what it’s like becoming and then being a lawmaker. He says near the beginning that it takes a certain kind of personality to make it this high in public office. “Few people end up being United States Senators by accident,” he writes. “At a minimum, it requires a certain megalomania, a belief that of all the gifted people in your state, you are somehow uniquely qualified to speak on their behalf….” Along with a burning ambition, he also admits to the other lodestone of campaigners: fear. “Not just fear of losing – although that is bad enough – but fear of total, complete humiliation.”

Describing not only the physical trials that are involved with becoming a Senator but also the emotional and interpersonal ones that come with it, my first thought was, “What sane person would choose this kind of life?”

It’s an illuminating book in many ways. My Inner Cynic has asked me to remind you that this is a book about Barack Obama, written by Barack Obama, and is not necessarily trustworthy in that sense. But the things Obama said in here are very consistent with the things he’s saying now, as long as we control for new information gained between 2006 and now. If I learned anything from this book, it’s that I now have confidence that he’s dealing honestly with the American people (given a certain political value of “honest” of course).

While I still don’t know if he’s going to be able to pull the country up into greatness the way his advance press claimed he would, I am at least confident that he has the nation’s best interests at heart. I like a lot of his ideas, and I think he’s got a good vision for the kind of America that I would enjoy living in someday. He may not get us there, but he can at least get us started.